Is Your Baby Getting Enough Breast Milk? It's natural for new mums to worry that they don't have enough milk to feed their baby. Not being able to physically see how much milk your producing, combined with sleep deprivation and surging hormones, means second-guessing ourselves is inevitable.

The truth is, most mums will produce enough milk to support their baby's needs. And if for some reason, a woman's milk supply is low, it's usually temporary. Low milk supply is generally a result of issues with the latch or other feeding problems on the baby's end. Correcting these issues is usually successful with the help of a lactation specialist.

Around day three to five is when our "milk comes in". This is when we see the most significant changes in our breasts. Swelling, heaviness, fullness, and for some, engorgement is a sure sign that your milk has officially arrived. This milk is creamier and has a higher fat content than colostrum.

Over the next six to eight weeks, your milk supply becomes 'established'. Milk production is based on supply and demand. As milk is removed from your breasts, you signal them to make more. The more breast milk that is removed, the more you will make.

Signs Your Baby Is Getting Enough Milk

It's common for babies to feed anywhere between every 45 minutes to every couple of hours in the beginning. Unfortunately, this only reinforces the niggly suspicion that you're not making enough milk. So, instead of focusing on how often you're feeding, it's essential to focus on the secondary signals. These include:

3. Baby's stool is pale yellow with a soft consistency

When your milk establishes at around the eight-twelve-week mark, many women find that their breasts soften a lot. The 'let down' sensation also becomes less intense, and these changes often cause women to worry that their milk supply is drying up.

If your goal is to breastfeed exclusively, it's important not to supplement with formula at this stage, as it will cause your milk supply to decrease. Instead, we recommend focusing on regularly emptying your breasts, getting as much rest as you can, staying hydrated, and introducing a lactation aid, like our In Shape Mummy Health Shakes. 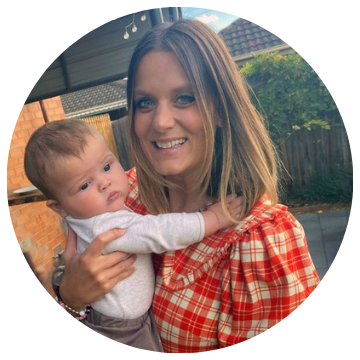 Shevi is a qualified nutritionist with a bachelor’s degree in nutrition and food sciences. As a new mum herself, she is passionate about postnatal-related nutrition. Shevi has worked alongside some of the most famous leaders and celebrities in the fitness industry throughout Australia and the UK. 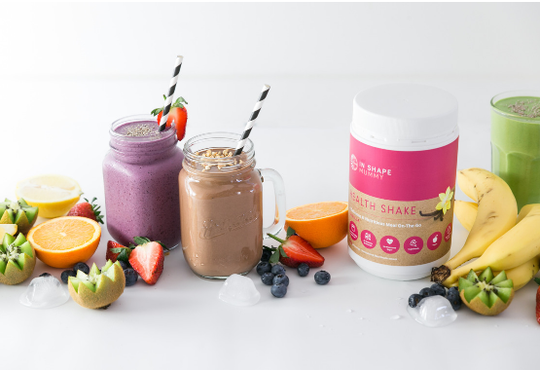 Many Busy Mums don't have time to cook health food and exercise ALL the time.

Great news! Now you can Fast Track Getting In Shape with our Quick, Easy and Delicious Superfood Meal Replacement, the In Shape Mummy Health Shake for Breastfeeding Mums.

Support your Milk Supply and Boost Your Energy while you Lose Weight with our Premium blend of Organic Pea & Brown Rice Protein, 25 Vitamins & Minerals, Probiotics plus Organic Superfoods.

Enhanced with Milk Thistle and Fenugreek which are herbs that have been used for centuries to Support Breastfeeding. Plus, Probiotics to help strengthen your babies immune system.

100% Breastfeeding & Vegan Friendly. Contains NO Artificial Nasties, NO Soy, NO Dairy, NO Gluten & NO Caffeine. Made in Australia.

Enjoy as the Quickest and Easiest Healthy Meal!

Did you know there are 2 types of In Shape Mummy Health Shakes?

We want to help mums of all stages of life look and feel their best. 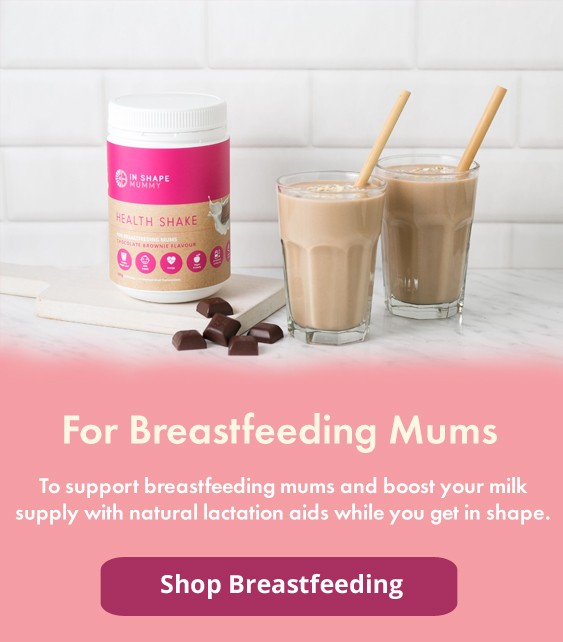 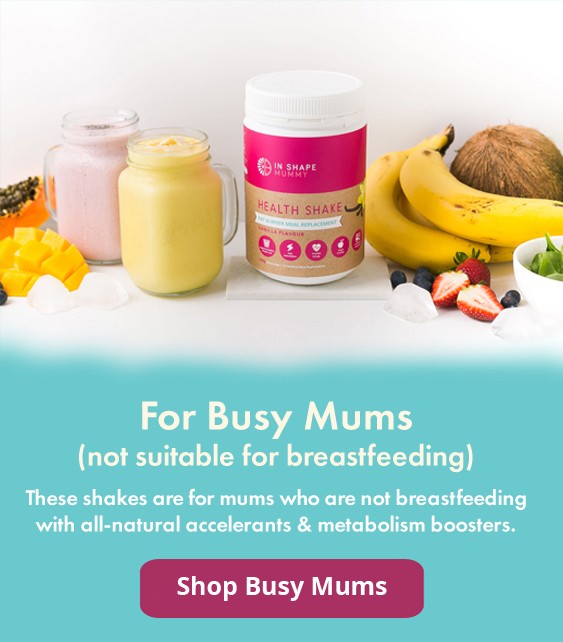 Mums are RAVING about the In Shape Mummy Health Shake... 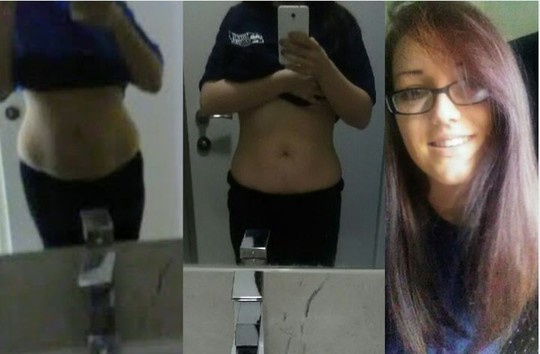 "I'm loving it so far.. I'm already down from in weight and I feel great :)  Not exaggerating when I say this is the best purchase I ever made .. can't wait to get to my first mini goal of 65kgs then set my new goal of 60kgs :) .. so far it's been life changing, thank you so much!! It has literally boosted my milk supply. I used to pump 160mls and now I average 240mls .. I've never been able to get that." ""I discovered In Shape Mummy Health Shakes not long after my second baby was born. He has an intolerance to dairy so I was looking to find something that was safe for breastfeeding, and also vegan friendly. I have recently started a detox program with the help of a naturopath. She was so impressed with the ingredients that she has encouraged me to continue having it! In Shape Mummy has not only helped me lose weight, but it’s helped me nourish my body when I’ve been time poor and sleep deprived. It’s the only shake that I actually enjoy the taste of! My breakfast everyday includes ice, almond milk, water, a banana and my In Shape Mummy (my current fave is the caramel fudge!). At 11 months postpartum I feel great! And my breastfeeding journey is still going strong - my milk is in perfect supply for what Bub needs. I cannot recommend In Shape Mummy Health Shakes more highly!” "I am so grateful for all the people behind the In Shape Mummy Health Shake. It has helped me lose my post-pregnancy weight in a healthy way and very helpful during days where I had to wake up early for school drop offs and going to work. I've lost 15 kgs and I couldn't be any happier. I've regained my energy and have lots of time to play with my 2 kids. It's breastfeeding-friendly which is even better for me because the nutrients this Healthy Shake has is good for my little one. I feel great and motivated to work out even more when I saw my results. I'm so in love with this Healthy Shake!!! Thanks to Lisa and the rest of their team. ♥️" 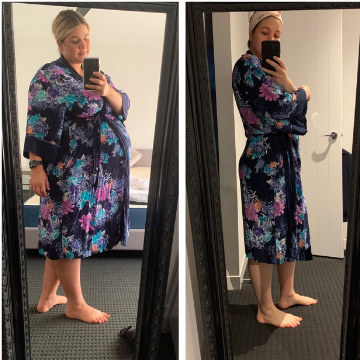 "I've lost 31.5 kgs thanks to the In Shape Mummy Health Shakes. 110 kgs to 78.5 kgs! Juggling two little boys under 2 years old doesn't leave much time for healthy choices for Mummy and the In Shape Mummy Health Shake is such an easy solution to get all the goodness I need to keep going! My older son is 20 months and I didn't get the chance to lose the weight gained whilst carrying him before I was pregnant again with baby #2. I easily gained 40kgs across the two pregnancies and no thanks to terrible pelvic pain in pregnancy #2 wasn't able to keep active. Now that my second son is here and the pelvic pain has gone I have stuck to replacing breakfast with my shake and walking every morning for the duration of the morning sleep. Some days I will do a second shorter walk during his nap. I'm still able to enjoy yummy healthy foods and definitely do not feel like I'm going without. I no longer crave sugary foods as the shake sets me up for the day with its magical satisfying ingredients! The shake has become even more of a must since returning to work! If I thought I was busy before, life just got a whole lot busier! Now that I've lost the weight, I have more energy, zero aches and pains and have a better mood. I tell all my friends about In Shape Mummy because easy weight loss doesn't need to be a secret! Xx" "I have lost over 30kg with In Shape Mummy Health Shakes, exercise and a complete diet change. ⁠⁠ I started at size 22 and am a loose size 12 at the moment… and nearly a 10! ⁠I feel so much better! With my injuries in my spine, pelvis and knee my weight loss has been the best thing for my pain. ⁠
7-8 months ago I couldn’t have even imagined I could drop this much weight! The change in my life has been insane! ⁠ My advice to other mums is “stick with it and don’t give up!” ⁠ Thanks so very much for your In Shape Mummy Health Shakes. They are the best thing for mums on the go and while breastfeeding as well. Words can not express how grateful I am with my weight loss. I couldn’t of started this without your shakes. My life is forever changed." ⁠